We Do Scientific Analysis

We love looking at the details.

“Every year, ABMI scientists create new products that couldn’t have been done without ABMI data. Recently, we created models that show how individual species respond to different human footprints. Looking at that information, I think, ‘Wow! That’s a really neat product that wouldn’t exist if we didn’t have the ABMI’. —it’ll change how management is done in this province’.”
-- Dr. Jim Schieck, Co-Director, ABMI Science Centre

The ABMI manages and maintains excellence for all scientific and technical aspects of its data through the ABMI Science Centre.. As the ABMI has matured as an organization, its scientists have shifted their focus from protocol development in the early days to data interpretation and product innovation. And, the in the future, ABMI scientists and their collaborators will continue to be  dedicated to working at the frontier of the science of biodiversity monitoring.

A key concern of ABMI scientists has been protocol development. Since the ABMI program was rolled out in 2007, however, there’s been a shift towards finding incremental improvements in these protocols. The new question: is there a better way to collect the data? 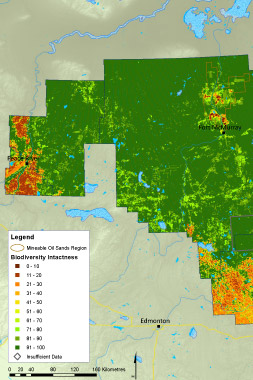 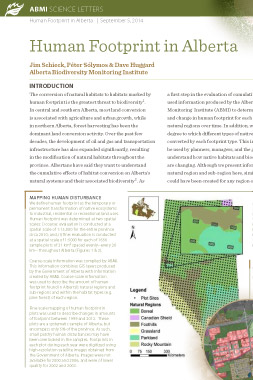 With the accumulation of species, habitat, and human footprint data at the ABMI in recent years, data interpretation and product innovation have emerged as key activities of ABMI scientists. The Science Centre’s mandate has expanded to encompass:

A “greatest hits” list of ABMI Science Centre’s  products and analyses of recent years include:

Several types of analyses are currently underway at the ABMI’s Science Centre that will inform tomorrow’s products, such as:

The ABMI in Space! Working with NASA to Examine the Impacts of Climate Change on Northern & Boreal Ecosystems

Wetland Monitoring at the ABMI

ABMI Science is conducted by a core group of scientists, and is integrated closely with a network of collaborating scientists from a variety of institutions including:

ABMI's Science in Progress shares the methodology and results of still-evolving work,  which may be of current interest to organizations or individuals engaged in biodiversity monitoring. Science in Progress showcases interesting results or ideas, but content may be subject to change as the research develops and is presented on an 'as-is' basis.

Stay on top of our latest scientific developments, subscribe to ABMI's Science Letters—a short journal-like publication—focusing on a specific project and describes key results relevant to organizations or individuals engaged in biodiversity monitoring.