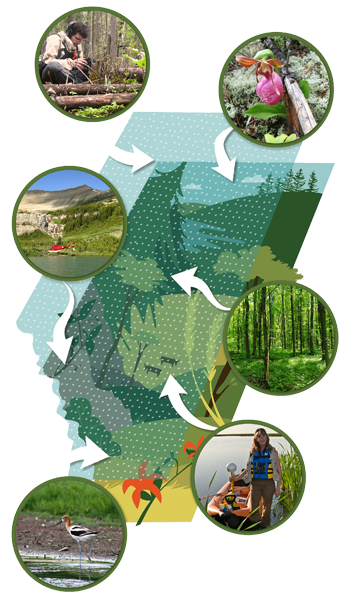 From the boreal forest in the north to the grasslands in the south, the ABMI monitors the state of Alberta’s biodiversity. To do this, the ABMI employs a systematic grid of 1,656 site locations, spaced 20 km apart, to collect biodiversity information on terrestrial and wetland sites.

At each location, ABMI technicians record the species that are present and measure a variety of habitat characteristics. For species that cannot be identified in the field (e.g., mites and lichen), ABMI taxonomists located at the Royal Alberta Museum sort, identify, and archive samples to complete the Institute’s species-level dataset. Through our field and laboratory efforts, the ABMI tracks over 2,500 species.

Regardless of the scale used for mapping, the ABMI divides all HF features into 115 feature types which are then classified into 21 sublayers and six categories associated with energy, forestry, agriculture, residential and industrial, human-created waterbodies, and transportation for analysis and reporting. These mapped products are updated at regular intervals to track changes in human footprint and habitat over time and identify relationships between human land use, habitat, and species abundance when and where they exist.

The scale and depth of the ABMI’s monitoring program described above make it a unique program nationally, and a leader internationally.