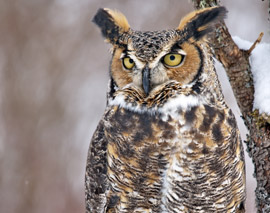 The ABMI’s core biodiversity monitoring program tracks changes in groups of common plants and animals in order to understand how their populations might be changing over time. We also measure a variety of habitat characteristics and determine how our human footprint is changing over time, in order to identify relationships between human land use, habitat and species abundance, when and where they exist.

But the core biodiversity monitoring program isn’t optimized for tracking changes in the populations of species that are rare or elusive – these species often aren’t fully captured by our core monitoring efforts. So, the ABMI’s Rare Animals project was designed to address this gap.

The project was originally conceived and initiated through the Ecological Monitoring Committee for the Lower Athabasca (EMCLA). The EMCLA, a consortium of oil sands companies, government ministries and agencies coordinated by the ABMI, was established in 2010 with the goal of designing cost-efficient protocols to monitor rare and elusive vocalizing species – species that make sounds.

The project is focused on several vocalizing species: owls, amphibians, and a secretive marsh bird, the Yellow Rail, which is a species of Special Concern in Canada. The overall aim of the monitoring program is to understand these species’ status, habitat preferences, and distribution across the Lower Athabasca region. 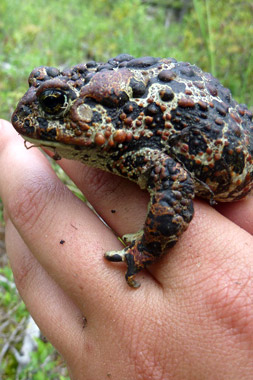 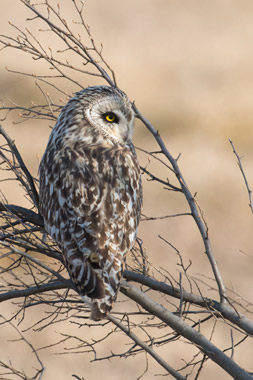 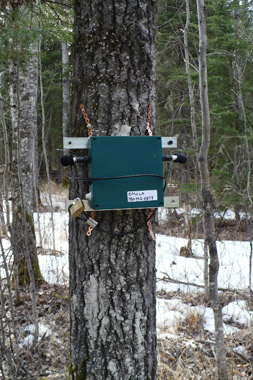 Automated recording unit mounted on a tree in boreal Alberta

Each species is associated with specific management and research questions that the monitoring program is designed to address:

ARUs are sound recorders that can be deployed at remote locations and programmed to record at set time intervals from weeks to months in a variety of different, often remote, habitats. Weighing between three and seven pounds and able to record in temperatures ranging from below zero to +500C, these recorders are mounted on trees or other sturdy posts and offer enormous advantages when monitoring rare or elusive species:

The ABMI Rare Animals project can be used to inform acoustic species management, for example, species at risk monitoring and mitigation programs, reclamation planning and reporting, and conducting census at the lease-level to determine a more accurate species population census. The Rare Animals project is playing an important role in regional species monitoring efforts in the Lower Athabasca and can be used to determine where these rare vocalizing species are found and how best to minimize impact on these species.

The project was originally conceived and initiated through the Ecological Monitoring Committee for the Lower Athabasca (EMCLA). The EMCLA, a consortium of oil sands companies, government ministries and agencies coordinated by the ABMI, was established in 2010 with the goal of designing cost-efficient protocols to monitor rare and elusive vocalizing species in the Lower Athabasca region of northeastern Alberta.

Read more about the history of the EMCLA and the Rare Animals project here.

On the Trail of the Yellow Rail

Owls in a Changing Soundscape

Better Environmental Management Through Monitoring: The Story of the Yellow Rail in the Lower Athabasca