Watching and Listening to Alberta’s Forest Together

A daytime high of -25 degrees Celsius did not deter a group of trappers, municipal representatives, and scientists from gathering in the bush near High Level recently. All were eager to see the successful launch of a new multi-year project spearheaded by the Alberta Northwest Species at Risk Committee (NWSAR) to better understand mammal and bird species in the region and how they respond to different human activities. Frostbite conditions were no barrier to the members of the Alberta Trappers Association (ATA) in attendance to learn how to deploy wildlife monitoring devices following the Alberta Biodiversity Monitoring Institute’s (ABMI) standardized protocols that will be used in this project.

Motivated to see local land-use decisions based on credible, high-quality data, and with a mandate to involve local communities in land stewardship activities, NWSAR brought the ABMI and ATA in as partners to contribute to an overall effort to gather more data on the state of several key species on the Northwestern landscape.

The NWSAR sees strong value in this type of collaboration. “We’re so excited to be working with the ABMI, and are pleased that the resulting information will not only be relevant in the Northwest, but will also benefit from continuity with the ABMI’s provincewide dataset”, says Hayley Gavin, Town of High Level’s Regional Land-use and Environmental Project Manager and NWSAR’s Administrator. “We’re also delighted at the positive response we’ve received from community members, especially the board and members of the ATA”.

Bill Abercrombie, President of the ATA, welcomes the opportunity to contribute to the overall effort.“This is a way for us to use our skillset and our passion for the land to be able to contribute to the body of research that will, in the end, give us much better and sustainable land use management practices.”

By the end of March 2020, 150 cameras and 24 ARUs will have been deployed by the ATA, and the first year of wildlife monitoring will commence. Trappers will service these devices annually every winter for the next three years. Another dimension of the project includes a close examination of the vegetation and forest cover in the region, as well as the nature and extent of human footprint, or human activity, on the landscape. The ABMI annually updates a province wide human footprint inventory and is currently generating next-generation land cover products based on newly available satellite data. This remote-sensing work will be enhanced by boots-on-the-ground verification activities, once again drawing on the expertise of local people in Northwest Alberta. Key objectives include tracking the recovery of previously disturbed areas, and identifying priority areas for future restoration efforts.

The resulting information will provide the most complete understanding yet of the status of species and habitat in two of Alberta’s Northwest Caribou ranges. Results will be shared publicly and will help inform decisions around land-management, habitat restoration, and the responsible stewardship of species at risk such as the Woodland Caribou. Perhaps as importantly, the project also shows the value of collaboration among scientists, municipal representatives, and community members.

Together, NWSAR, the ABMI, and the ATA are paving the way for informed stewardship of land and species in Alberta’s Northwest. “We’re delighted to work with the support of NWSAR and assistance from the ATA”, says Jim Herbers, Executive Director of the ABMI. “We hope it’s the first of many such collaborative projects.” 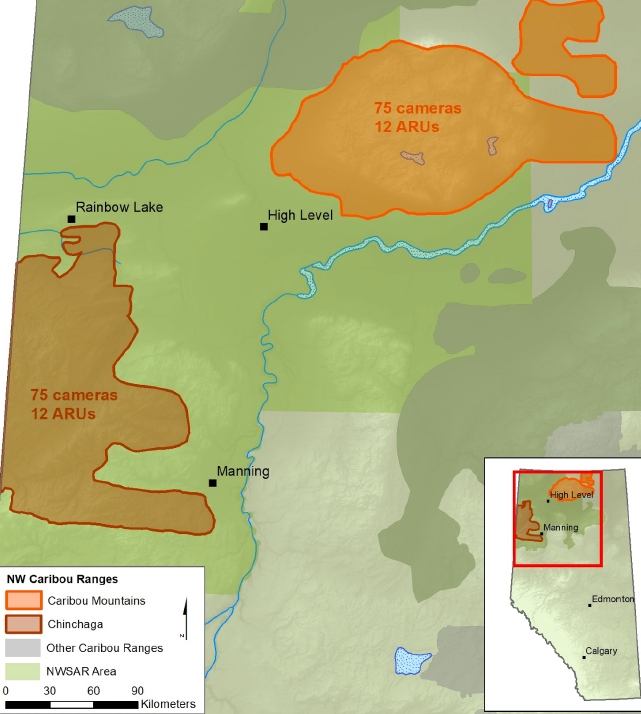 Other Resources
Video overview of the project produced by Michael Short of Let’s Go Outdoors
https://www.youtube.com/watch?v=jQF0kzRQ0Rg