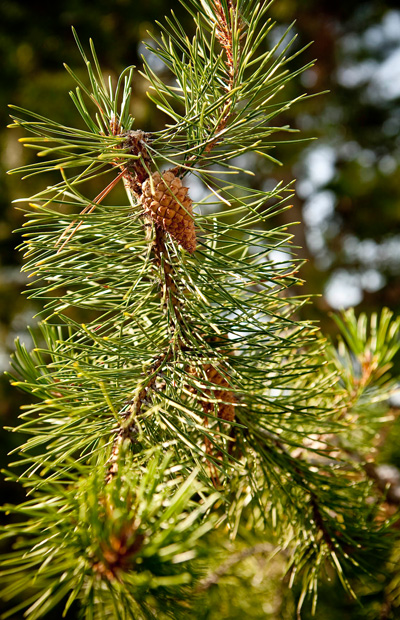 Over its decade-plus of operations, the ABMI has generated a comprehensive dataset on Alberta’s species, their habitats, and the extent and type of human footprint across the province. With this information, the ABMI has developed analyses to predict species' relative abundances and examine species' responses to vegetation and soil types, as well as human footprint in Alberta. These methods have been applied to hundreds of species; this profile provides summary results for one.

There are three main results sections in this species profile. The first section summarizes what vegetation, soil, and human footprint types the species uses in Alberta. Next, the data are used to identify which land use activities have the biggest impact (positive or negative) on the species' relative abundance. Finally, a series of relative abundance maps illustrate the species' predicted distribution under current and reference conditions, and where it’s expected to have increased or decreased as a result of human-caused changes to its habitat.

The target audiences for species profiles are resource managers in Alberta. Summary data can be used to support land-use planning and mitigate the risks of development on a species of interest. While developed to support resource management, these species profiles are also of wider interest to anyone wanting information on species that live in Alberta, what habitats they are found in, and how our land use affects their populations.

Please note that the results are predictions based on the best available data at the current time. All results must be considered with caution; interpretation caveats are presented with each result. As with any statistical model, our confidence in the modelled outputs will increase as we gather more data and refine our models; to that end we update the summary results annually based on new data. As an internal check, for species with additional information in the literature, we examine whether our models produce ecologically meaningful results. For data-poor species, our predictions are the first contribution towards developing an understanding of the species' ecology.

We use a set of statistical models to relate the relative abundance of each species measured at ABMI sites to three sets of variables: vegetation types, human footprint and geographic location. The analyses are done separately for two overlapping regions: North or Forested Region (including Boreal Forest, Foothills, Canadian Shield and Parkland Natural Region), and South or Prairie Region (includes Grassland and Parkland Natural Regions, and the Dry Mixedwood Natural Subregion in the Boreal Natural Region).

The analysis is conducted in a ‘model selection framework’, which means that the models for each species are only as complex as the data for that species support. For example, the models for a rarer species with few records may not be able to separate different age classes or even broad stand types. All age classes or several stand types will therefore all have the same average value in the vegetation figures. This does not mean that there are truly no differences between these types for that species. It just means that we do not yet have enough data to estimate abundances in all those individual vegetation types.

This modeling requires moderate sample sizes, so we can only do the analyses for species that have at least 20 records in a natural region. ABMI has some information on many other rarer species. We can provide simpler summaries of our records for these species.

The bird modeling differed from other taxa from some aspects because the data set is more extensive (see Collaborations). The combined data set needed to be standardized due to the differences in survey protocol among the data sets. Algorithms to deal with different protocols in bird surveys and methods for estimating predictive uncertainty were developed in collaboration with the Boreal Avian Modelling Project (BAM) team (Sólymos et al. 2013). BAM also provided data management help for organizing bird point count data. The minimum number of detections required for model building for birds was 25.

The bioclimatic variables used in the modeling were calculated at a 4-km resolution using monthly climate normals of temperature and precipitation averaged over 1961-1990. The monthly climate normals are based on instrument-measured climate data that were interpolated by PRISM (Daly et al., 2002) and WorldClim (Hijmans et al., 2005). The western North American portion of these data are described by Wang et al. (2011).

​Full details of habitat modeling can be found in the ABMI Species Website Manual.

There are many limitations and caveats about the use of these habitat models. Click on each for further details:

Species-habitat Associations in the Forested Region

Relationship to Linear Footprint in the Forested Region 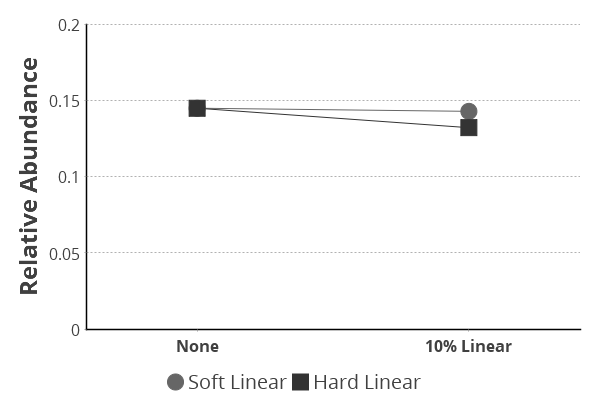 Linear Footprint Graph: Species relative abundance predicted for habitat with no human footprint compared to habitat in which 10% of the area is converted to either soft or hard linear footprint.

ABMI's sector effects analysis is used to assess the impact of different types of human development activities (herein called a sector) on a species’ relative abundance. We calculate the effects of different industrial sectors by predicting the abundance of each species in the current landbase versus a landbase in which the footprint associated with a particular industrial sector has been back-filled. “Back-filling” means replacing that sector’s footprint with the vegetation or soil type that would have been present before the footprint was made. We report on two aspects of these “sector effects”:

Step 1. We develop habitat models for species based on ABMI field data.

Step 4. We apply the habitat models to predict a species’ abundance in the current map and in the partially back-filled map for a sector. We use the differences in abundance in just the areas with the sector’s footprint to calculate the within-footprint effect. We use the differences in total abundance over the whole region to calculate the sector’s effect on the regional population of the species.

The sector effect results are based on each species’ habitat models applied to the maps of vegetation or soils and footprint in the region, so all the limitations of the modeling and mapping apply to these results. There are additional caveats with this product:

- Where footprint types overlap, such as a well site in a cultivated field, or a road through a forestry cutblock, we assign the footprint type as being “on top”, and its sector is credited with the effect of footprint in that overlap area.

- We cannot tell which roads are associated with particular sectors, such as roads to well sites or forestry cutblocks, so all roads are called transportation sector.

- Two sectors sometimes operate together to reduce cumulative effects, such as forestry cutblocks being placed where energy developments are planned. A forestry cutblock on a future wellsite, for example, would be assigned to forestry until the wellpad was built, when that area of footprint would change to the energy sector.

- We have difficulty separating some types of footprint, such as urban and industrial areas, so those types are assigned to only one of the two or more sectors involved.

- Sector effects only include direct effects of footprint, not indirect effects (e.g., pollution, noise, access effects) or possible cumulative effects where two or more sectors interact (e.g., roads allowing weeds into an area, where they can then colonize harvest areas). 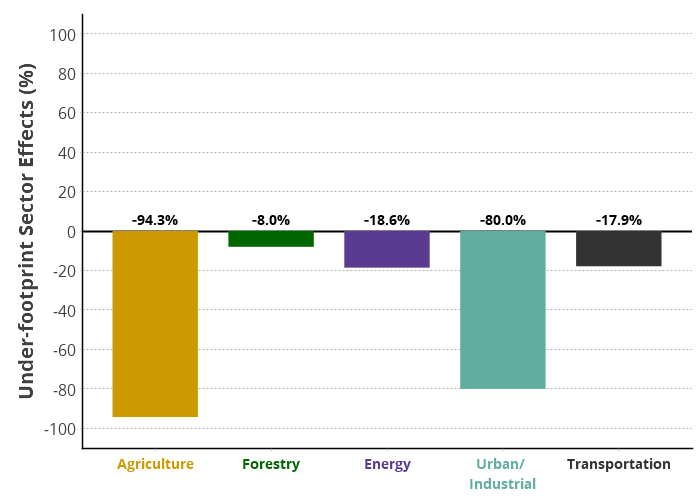 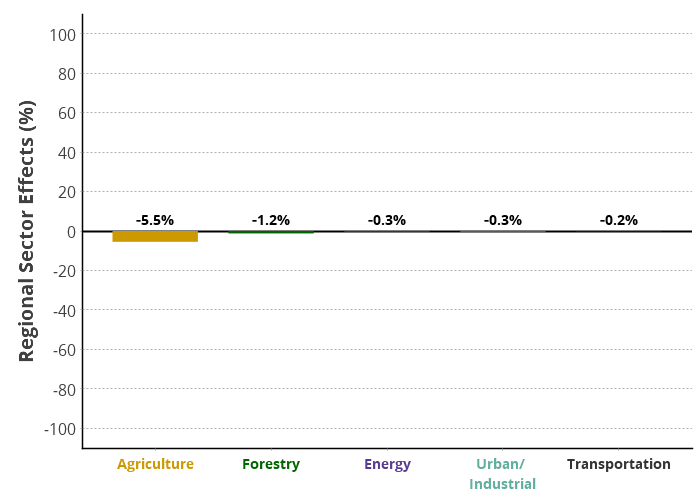 Province-wide maps are generated by applying the models of a species’ relationship with vegetation or soil types, human footprint, geographic location and climate to a set of 1-km² pixels covering the province. Within each pixel, the proportion of each vegetation or soil and human footprint type in the 1-km² area is determined, along with the latitude, longitude and climate values at the centre of the pixel. The ‘current’ maps summarize information from the current landbase, including current human footprint (2014 Human Footprint Inventory [HFI] is being used presently, except for birds which is based on the 2012 HFI).

The ‘reference’ maps summarize information from a back-filled map, in which footprint has been removed and replaced with the vegetation type that was expected prior to the footprint being created. Back-filling is based on adjacent vegetation types and rules about what vegetation types different footprint types can occur in (e.g., forestry occurs only in harvestable-age upland stands). The ‘difference’ maps show the areas where the species is predicted to be higher or lower in the current map compared to the reference map.

There are several limitations to ABMI species maps:

In addition, we also present the difference in relative abundance between current and reference conditions:

In the difference map, green indicates the species was predicted to have higher abundance under present conditions than under reference conditions, with the opposite true for 1 km² units depicted in pink. The intensity of green and pink represent the relative magnitude of increase or decrease for the species between current and reference conditions.

These maps have uncertainty due to uncertainty in the models and in the underlying vegetation map.

The current condition is the predicted relative abundance of Pinus contorta taking current human footprint (circa 2018) into account.

Move the slider to the right (→) to view the Current Predicted Relative Abundance map.

Use slider to compare maps

The reference condition shows the predicted relative abundance of Pinus contorta after all human footprint had been backfilled based on native vegetation in the surrounding area.

Move the slider to the left (←) to view the Reference Predicted Relative Abundance map.

The difference map shows areas where the current relative abundance of Pinus contorta is predicted to be higher or lower compared to reference conditions. In other words, where habitat suitability is predicted to increase or decrease as a result of human footprint.