It's about more than we know.

The Diversity in Alberta

Alberta is a diverse place. The province has six major ecosystem types called Natural Regions, each with distinctive geographical and climatic conditions that support an enormous variety of plants and animals: 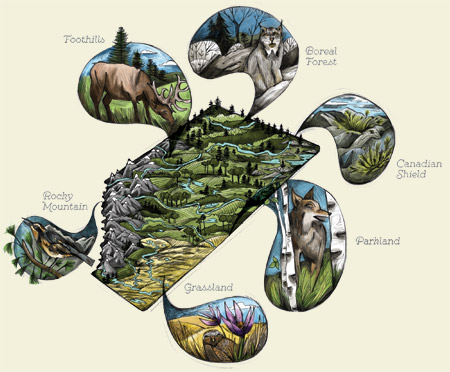 Yet, only about 3,000 species (roughly 4% of Alberta’s biodiversity), have been described and named. These species are the usual suspects we all recognize, like large furry mammals, flowering plants and trees, birds, and some insects, such as dragonflies, butterflies, and bees. The vast majority of species, unknown to all of us, are mostly micro-organisms like insects and bacteria that are too small to see with the naked eye.

The ABMI Monitors Over 2,500 Species

The ABMI monitors approximately 2,500 of Alberta’s species. This includes well-known species like Moose, American Robin, and Common Wild Rose, as well as species we know very little about, like various armoured mite and lichen species. ABMI data has even supported the discovery of 14 species of armoured mites in Alberta, new to science. It is amazing what you can find if you just go and look!

The ABMI monitors seven taxonomic groups as listed below.