It's about more than we know.

Managing for the Future

Alberta’s climate is changing, and Alberta’s biodiversity is changing right along with it. This undeniable fact is the reason why the ABMI is developing knowledge and tools to manage for the future of our species and ecosystems in the face of climate change.

By the end of this century, the average temperature of our province will likely increase at least 2°C. People living in Edmonton will experience temperatures that are currently experienced by Calgarians 300 km to the south. Along with this warming, the timing and amount of rain and snow will change, and extreme weather events, like heavy rain and wind, are likely to become more frequent. These changes mean the biodiversity we currently associate with particular parts of the province may become unfamiliar in the future. 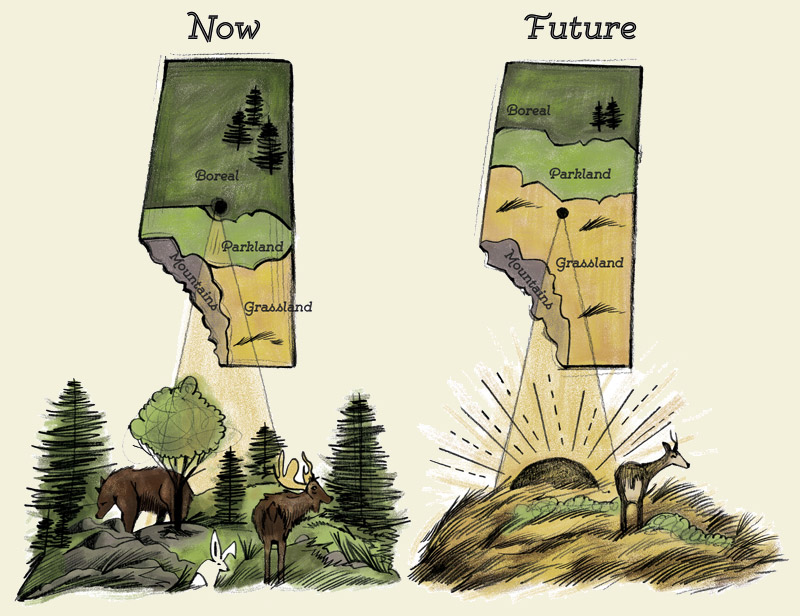 The Impacts of Recent Climate Change

We can already observe some impacts on our landscape due to climate change:

Many species, including both native and non-native ones, may take advantage of a warming climate by expanding their ranges. Species that are less mobile (for example, some flowering plants like the Purple Pitcher Plant), however, will need to adapt in place or face extirpation, and possibly even extinction. One of the largest changes we may see is a reduction in the area of the boreal forest in the north as it slowly succumbs to disturbances like fire and is replaced by species more commonly found in parkland ecosystems further south. For example, White Spruce forests will likely transition to Trembling Aspen forests as climate warms.

A warming climate, and the corresponding changes to Alberta’s biodiversity, will also affect the supply of ecosystem services—the benefits we receive from nature—such as, the crops we grow, the forests we harvest, and the water we drink. In the case of crop production, although the growing season is expected to lengthen, the simultaneous predicted decrease in precipitation may lower crop yield overall in parts of the province. Furthermore, because much of Alberta is expected to be hotter and drier, particularly during the summer months, natural disturbances like drought and wildfire are also expected to intensify. All of these outcomes will ultimately have an impact on human communities, and the livelihoods of individual Albertans, by potentially reducing timber harvests, decreasing local water supply, or increasing fire, to name a few.

The implications of climate change on the wild Alberta we know today and on Albertans are far-reaching. The choices we make today about land-use, natural resource management, and species management may determine how vulnerable or resilient Alberta’s species, ecosystems, and human communities are to the effects of climate change.