The genesis of our organization.

The genesis of the Alberta Biodiversity Monitoring Institute (ABMI) as we know it today, arose out of a compelling need to monitor and understand how Alberta's rapidly changing landscapes affect our wildlife and habitats.

In the late 90s Alberta had legislation that required measurement of performance around various types of biota. However, the province needed a comprehensive system to actually do that. The reality of growing demand for Alberta’s resources, from forest products to oil and gas, and the associated population growth, resulted in an Alberta landscape in transformation. To make informed decisions, Albertans needed to understand how increased land use was affecting Alberta’s species and ecosystems. The question facing the ABMI’s founding scientists was, “Rather than look at impacts on a few select species and their habitats in a particular area, how can we evaluate the combined effect of various human activities on Alberta’s natural environments more broadly?”

In other words, they asked themselves, what does a regional cumulative effects biodiversity monitoring program need to look like? Their goal: design a rigorous system effective at provincial and regional scales that can detect and track changes in Alberta’s ecosystems if and when changes occur.

Scientists and resource managers collectively acknowledged that Alberta urgently required an independent, broad-based and long-term monitoring program that accurately and consistently reported on the status of biodiversity. No small feat, but they were up for the challenge.

The program needed to be built from the ground up. It would require rigorous science, dedicated partners and a passionate team. That is exactly what we have nurtured at the ABMI.

The Development of the ABMI 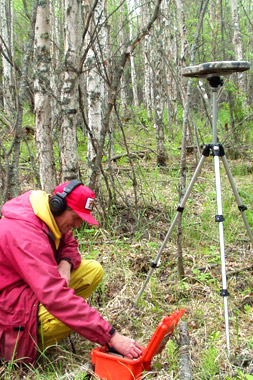 In 1997 a group of energetic resource managers and leading scientists recognized a gap in the management system and started contemplating what the Alberta Biodiversity Monitoring Program (which later became the ABMI) would look like. They began by designing an inventory prototype that would be science-based and comprehensive across the province of Alberta.

The first stage of development required four years of drafting scientific protocols, which are the foundation to the ABMI.

Initially the ABMI program focused on monitoring forests, however, this quickly expanded to monitor the populations of a diversity of biota, vegetation communities as well as the state of habitat structures and landscape patterns.

ABMI scientists considered what would be essential to monitor and how. Of course species would have to be monitored, but which ones of the tens of thousands that call Alberta home? They developed protocols to monitor those taxa (singular taxon: any unit used in the science of biological classification) that effectively reflect the health of the environment, as well changes to it. They also created protocols to measure the amount and extent of the multitude of habitats—or vegetation types—throughout the province as a proxy to capture information on taxa not directly monitored by the program.

It was clear to all, however, that a critical aspect of the program needed to be the capacity to gather information on the type and degree of human activity—or human footprint—on the landscape. So, ABMI scientists generated a variety of protocols to gather this type of information, without which it would be difficult to identify the factors driving observed changes in species abundance and/or habitats.

From a management perspective, if the factors causing environmental change are known, it’s possible to evaluate these factors, adjust behaviour, and achieve a different outcome.

In the subsequent prototype phase of the ABMI (2003-2006), ABMI scientists evaluated and refined the various field and laboratory protocols to ensure each one met a variety of objectives. For example, can the protocol be implemented in a standardized manner across the province? And, does it effectively generate the type of data necessary to evaluate cumulative effects?

Strong Values in a Changing Climate

Our original vision for the ABMI was one that is dedicated to openness, transparency, and scientific rigour. The program needed to be arm's-length from government and industry, scientifically neutral with free and accessible data in order to support educated decisionmaking.

Even though the ABMI has certainly grown and faced numerous challenges over the years, our core values have remained unchanged. 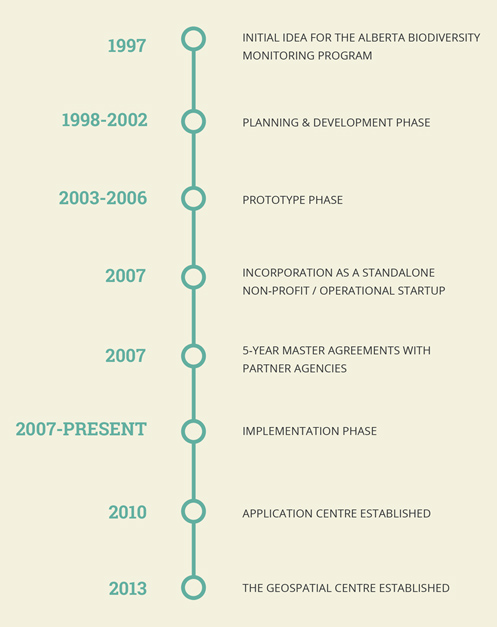